Bitten On The Arse

Sometimes you just have to let the fitness come to you…

Recently, in defiance of notable leg-speed limitations I won a Cross Country race.  And not just any race, it was a national title, albeit the Masters title (for moderately more mature athletes) but still a prestigious and highly competitive event.  It was a huge surprise to me and no doubt also to the gathered experts of Northern Irish running, given that I have virtually no pedigree in the discipline barring an Ulster Intermediate team gold medal acquired several years back that owed a lot more to the strength of my teammates than personal prowess on the sprinty rises and mud sodden strips that comprise a mid-Winter XC course.

It was one of those classic conglomerations of circumstance that even saw me on the start line.  Having religiously avoided the pressure to compete over the Winter for the last few years, assisted ably by an annual ritual of overtraining and inevitable injury, it was only following an e-mail from our club XC captain that I was even aware of the race.  A lamentable knowledge of local geography cajoled me into accepting the invite, under the illusion that Moira, where I was working that morning was close to Comber, where the race took place.  Inevitably my bike-maintenance course overran, the usual enthusiasm for the nature of my work overriding consciousness of the rapidly ticking clock, and so lateness and a missed start was potentially on the cards as I hurriedly crossed the car park and fired up the van.  Google Maps then played a blinder, putting the race supposedly in a McDonalds car park in Dundonald, miles from the actual venue, before frantic phone calls combined with red traffic light kit-donning deposited me at the course with barely fifteen minutes to spare.  Spikes on, very quick warm-up and head for the start line.

Such is my inexperience at Cross Country that I even asked teammate David McNeilly what to do off the start, having no clue whether people settle in to the suffering or go hell for leather from the off.  The coursing adrenaline from the time-pressured journey answered the question for me, legs pushing the pace without thought, tucking into a small lead group with the rest of the field rapidly dispersing in our wake.  No time for a practice lap meant no line choice prep, although with ankle deep mud spanning the full width between immaculately painted course markings there was evidently no magic solution, grinding through was the only option.

Lap one of four was a taster, sizing up rivals and testing muscles.  The sapping clag and lengthy climbs of the challenging 2k lap suiting us mountain runners well, killing the advantage of the road specialists who excel on drier, faster courses.  I felt comfortable enough near the front, tucked in behind Willowfield Harrier’s Neill Weir, watching his feet sliding on greasy corners and trying to match his cadence.  Lap two passed without note, without bothering to glance behind I was unaware that three of us had broken away.  Then on lap three the action really kicked off as Finn Valley AC’s Dermot McElchar made a very strong move, matched by Weir but not by myself.  Bizarrely, given a well-known appetite for both suffering and winning, I felt no desire to follow.  A lack of ambition that’d have seen me happy with a top twenty finish, coupled with an uncharacteristic non-plussedness regarding the result left me allowing the gap to form, a disinterested observer to the mud-flicking heels gradually easing away. 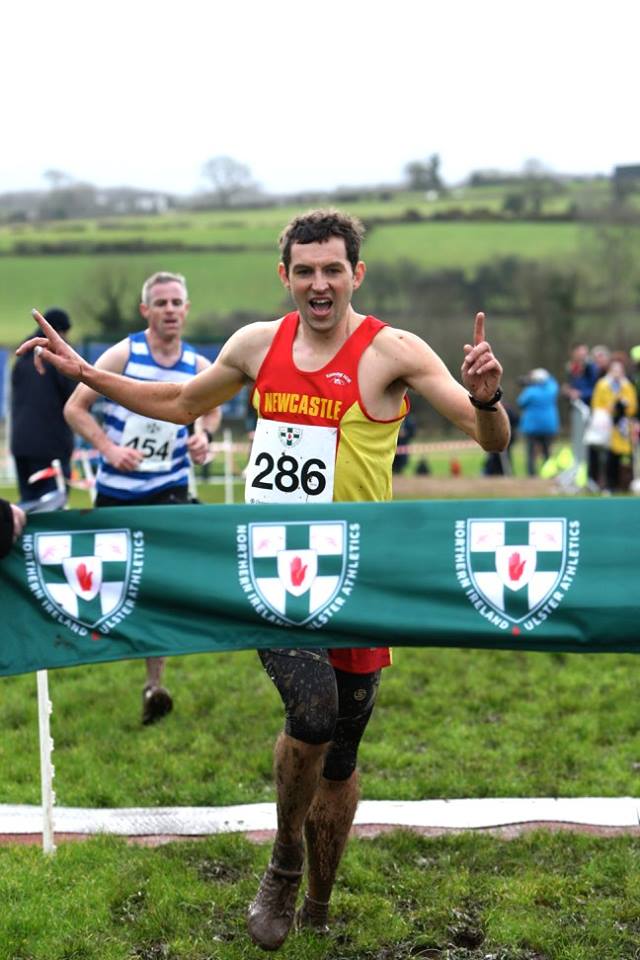 Hanging on for the win…. just!

Maintaining rhythm, my mind drifted, although the possibility of a potential podium finish with just 3km remaining did suddenly pique my interest, and what’s more, once we hit the extended climb on the back half of the course the gap suddenly disappeared.  It was at that point that I strongly suspected the win was probably mine.  The penultimate lap ended with a marked slowing in pace, tucking in behind Neill to shelter from a rasping headwind, I was happy to allow speeds to drop, bringing more figures into my peripheral vision, an athletes sixth sense able to recognise multiple footsteps and the weight of figures on my shoulder.  Tactics were brewing and I knew how the rest of my race would pan out.

Kicking on through the start/finish line immediately upon commencing the final lap saw off all but Weir, the now familiar blue stripes of his Willowfield vest a constant and unshakeable companion.  However, I’d sensed a slight weariness on his previous lap, one that I planned to exploit with expert timing after pushing gently throughout the closing climbs.  With a few hundred metres remaining, I gambled all and put assertions to the test, an early sprint attack opening an instant gap that would easily maintain through the welcome sight of the finish barrier…

Except it wasn’t there!  Having not had time to scope the course, I was blissfully unaware that the line was a further hundred metres up a boggy climb, until to my horror I spied it just as the final reserves in lactic-choked limbs squeezed their last.  The confident strides shattered, legs swimming in a desperate gurning lunge for the line, the oft-cited clichés flooding my mind, running in treacle, rapidly going in reverse, grimly hanging on.  The winning margin was just two seconds and in honesty another ten metres would have reversed the 1-2 positions, I was virtually static on crossing the longed-for line whilst a probably shocked Neill Weir realised how close he’d come to an unlikely last-minute overhaul.

A few seconds of wheezing dizziness, followed by interviews and epic podium shots, then a bemused warm-down as the realisation of an unthinkable result began to sink.  It’s not that I didn’t rate my abilities, just that the concept of winning an XC race seemed so unfeasible, it’s never been on the cards before, and as a dedicated avoider of speed-work it certainly never entered my conscience.  Sometimes fitness just bites you on the arse when you don’t go looking for it, on this occasion, a Winter un-blighted by injury, coupled with a moderate alteration in training habits to help Seamus Lynch win the Castlewellan Christmas Cracker conspired to create some highly unexpected form.  Nice to still be shocked by a body that I thought I was getting to know after years of competition! 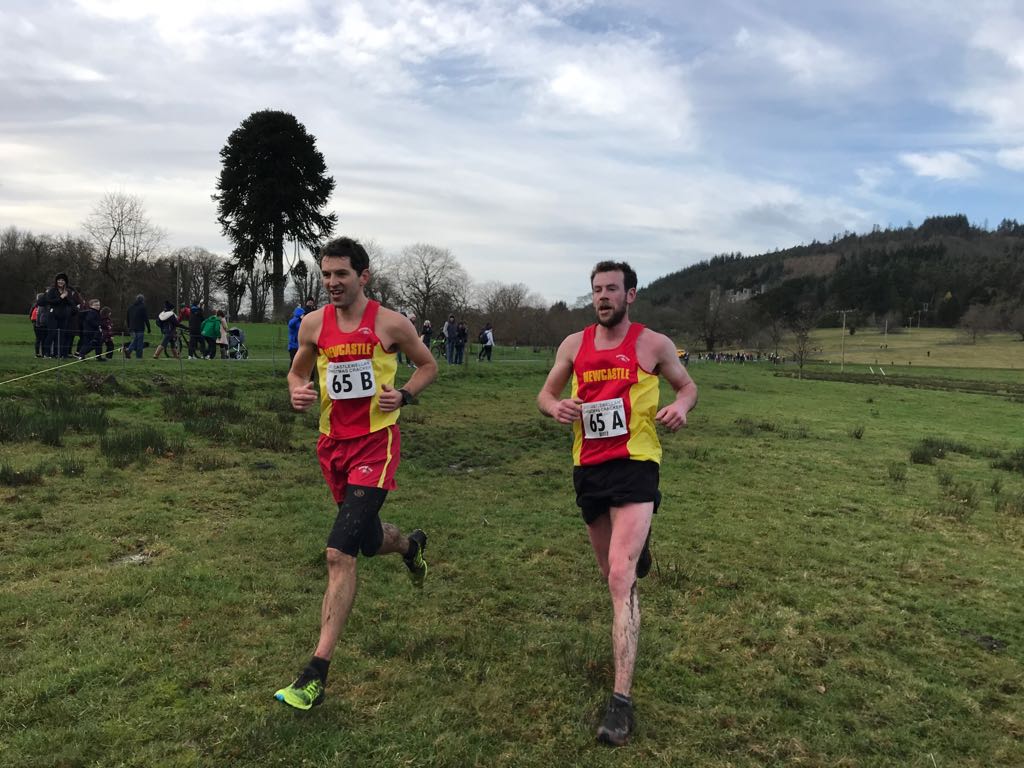 Cruising in for the win with Seamus at the Christmas Cracker

Results wise, I was even more delighted to see that my time would’ve been good enough for Silver in the Intermediate Ulster Champs, against those keen younger athletes with springier legs unhindered by nearly four decades of foolish abuse.  Compared to a finish somewhere in the Twenties when Newcastle AC took the title the only time I ever ran the Intermediate, this showed a huge improvement, one that has pricked a bit of pride.  The evening saw a lavish affair in Belfast’s Titanic building where my wife was awarded the prestigious ‘pharmacist of the year’ title, capping a memorable day and dwarfing my medal with a dumbbell heavy Oscars-style trophy.

Of course, as much as being unwittingly struck by peak fitness is a possibility, the opposite is a virtual inevitability.  Since that race on January 27th, Rock and Ride has provided one of the busiest six week work periods that I can remember, delivering course after course all over the country.  As enjoyable as it’s undoubtedly been, it’s also proven mentally and physically exhausting.  Yet it’s a factor I refused to acknowledge when continuing to pursue an ambitious training schedule designed to destroy the qualifying time at the Irish World Champs qualifier in early April.  Plugging hard-headedly on, ignoring the subtle drops in performance, and making the classic error of pushing harder in futile pursuance of previous levels, I took myself to the brink of injury when knocking out a speedy ten-miler last week in the teeth of the ‘Beast of The East’ storms.  Stuck in Doolin, County Clare, far from familiar training grounds I took to pacing out in knee-deep snow, atop a surreal cliff-top trail culminating at the ice-encrusted Cliffs of Moher.  Whilst spectacular, it was also foolhardy, with hard, iced surfaces and unfamiliar snow-enforced stride patterns combining with bitter wind-chills deep in the minus centigrade to over-extend fatigued muscles and joints.  Luckily I backed off just prior to genuine injury, for once heeding the twinges, and following a gentle week, came bursting back today with a very pleasing double Slieve Donard.  With four weeks to race day, for once my training plan is looking uncharacteristically flexible, with just one key session planned ten days before the event.  To return to my best for that date will require a hitherto untapped degree of bodily respect, the days of fighting for form may be over, I’m just going to hang out in the hills and wait for it to sneak up.