I love the Northern Irish mountain running scene, although of late I’ve been rather invisible within it.  It’s buoyant, flourishing and boasts many brilliantly organised events, from the iconic Slieve Donard race to the prestigious Mourne Skyline, with many other classics between.  With evening club races attracting over 350 runners, it’s clear to see that fell running in N.I. is no longer solely the preserve of the grizzled minority, and many new faces are being lured away from the gimmick laden world of compulsory finishers medals and garish t-shirts towards the purity of the open hills. 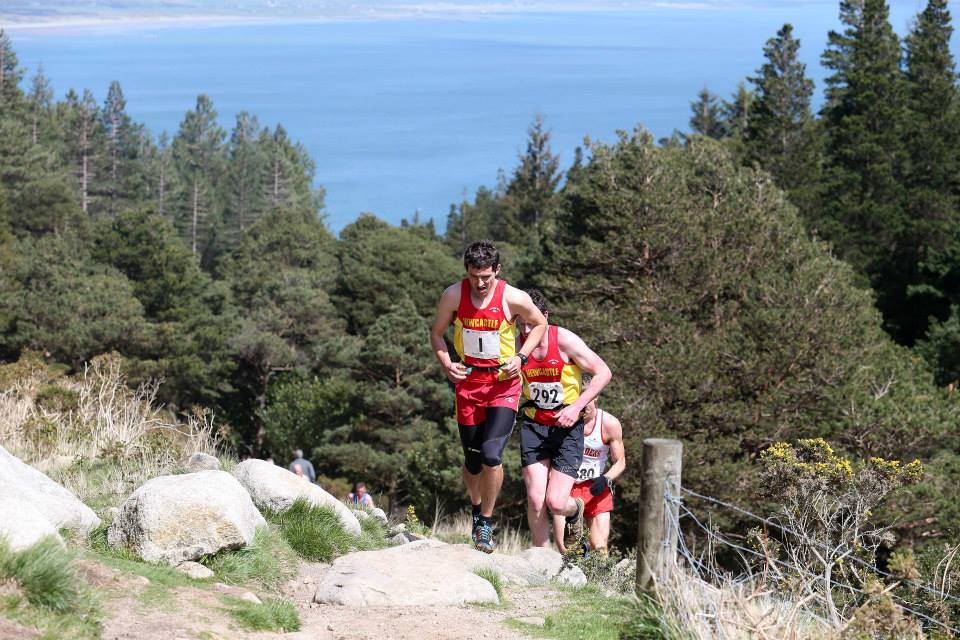 If there’s one thing lacking though, and I hope I don’t cause offence here, it’s genuine competition at the top end.  The same faces repeatedly take the accolades and although a new name creeps through occasionally, there’s never the strength in depth to guarantee that every race will be a gruelling fight to the line.  My heart lies in the Mournes, and hours of every week are spent sweating through this granite wonderland, but competitive motivation comes from being measured against the best of the best, on courses long enough to provide challenge regardless of pace.  The soul is in Ireland, but ambitions lie further afield.

The Yorkshire Three Peaks Race needs no introduction.  A self-proclaimed ‘marathon with mountains’, it covers a punishing 37.4km, with a considerable 1608m of ascent and descent over a multitude of surfaces and gradients.  Probably best described as three separate fell races with lengthy and speedy transitions between, it’s a unique challenge, and one I’ve long had on the radar.  As a Yorkshireman by birth, there’s something doubly alluring about the Dales, with many legends of the fells, past and present hailing from this land of the hardy.  Here is where I chose to pit myself against the best, expecting a sobering experience and hopefully a grand day out in that bizarre combination of pleasure and pain.

Competition is what I sought, and competition is what I was guaranteed!  This years entry list boasted six previous winners, several former world champions, up and coming international stars and some of the most talented British fell runners of this generation.  As the qualifier for the GB World Championships squad, everyone with aspirations of bagging a precious national jersey would be planning to peak for this particular effort.  Being this far out of my depth, and with zero knowledge of the course, pitting myself against rivals seemed pointless, but thankfully the organisers give an alternative target, a sub 3:15 time which would categorise my performance as ‘Elite’, and if achieved would normally guarantee a top 25 finish.

With my folks living just down the road in Settle, I enjoyed a leisurely morning without excessive travel, able to soak up the atmosphere on site, happily wandering round enjoying the views, blissful ignorance allaying any particular pre-race nerves.  Positioning myself near the front of the 900+ runners gave opportunity for a quick chat with Tom Owens, Karl Gray, Jack Wood and Murray Strain, acquaintances from previous World Championships, who’s rapidly disappearing heels would no doubt be my view for the next few minutes.  Not wrong!  The pace out of the start field was more akin to a Cross Country race than this epic, and I was forced to fight hard to not get swamped from behind whilst avoiding wasting energy that I’d definitely need later.

Pen-Y-Ghent is the first peak, with a highly runnable surface layered over an increasingly un-runnable gradient.  I took it very steady, marvelling at the pace of the leaders and keeping breathing controlled.  It felt like I was in the high-twenties by the time I bleeped the summit dibber but was apparently 17th, rapidly slipping a few more places preserving quads on the battering descent.

The next ten miles or so were fast and undulating with a speedy man-made track allowing a good leg stretch.  I felt strong throughout, despite a comedy fall in a rare boggy field, split seconds after enquiring after the health of a fellow competitor who also decided on an impromptu bum-slide.  It seemed like very little time before we exited on to the road, and my only familiar section up to the incredible Ribblehead Viaduct, recognisable from many photos and a quick scope out from the car the day before.

There was a great buzz around the gazebo planted there, assisted by live commentary giving some info on the runners as we passed.  I was delighted to be slightly ahead of both GB International Robbie Britton, a former 24 hour World Champs medallist and Jethro Lennox, former Three Peaks winner and World Long Distance champ, very esteemed company indeed!  Pacing past the crowds gathered at the imposing stone structure we began to ascend the lower slopes before the leg-sapping steeps of Whernside.

I’m still baffled what possessed me to seek a dry route over the river at the base of Whernside’s grassy slopes.  Needless to say, the second X-Talons touched greasy bedrock I was face down, spilling gels into the flow and cursing the shot of pain from my knee.  The ensuing adrenaline was more than welcome though and I ate into the climb with glee, sharing conversations with spectators, waxing lyrical about the race and surroundings.  On the ridiculously steep summit ramps, a victim of over-pacing was swallowed rapidly, gratifying to be the passer and not the passed, he no doubt had a torrid time from there on.  To the contrary, I was strengthening and after backing off the gas to avoid further straining my damaged leg on the rocky descent, I re-found rhythm and paced to the Hill Inn checkpoint where I was delighted to be told I was 14th. 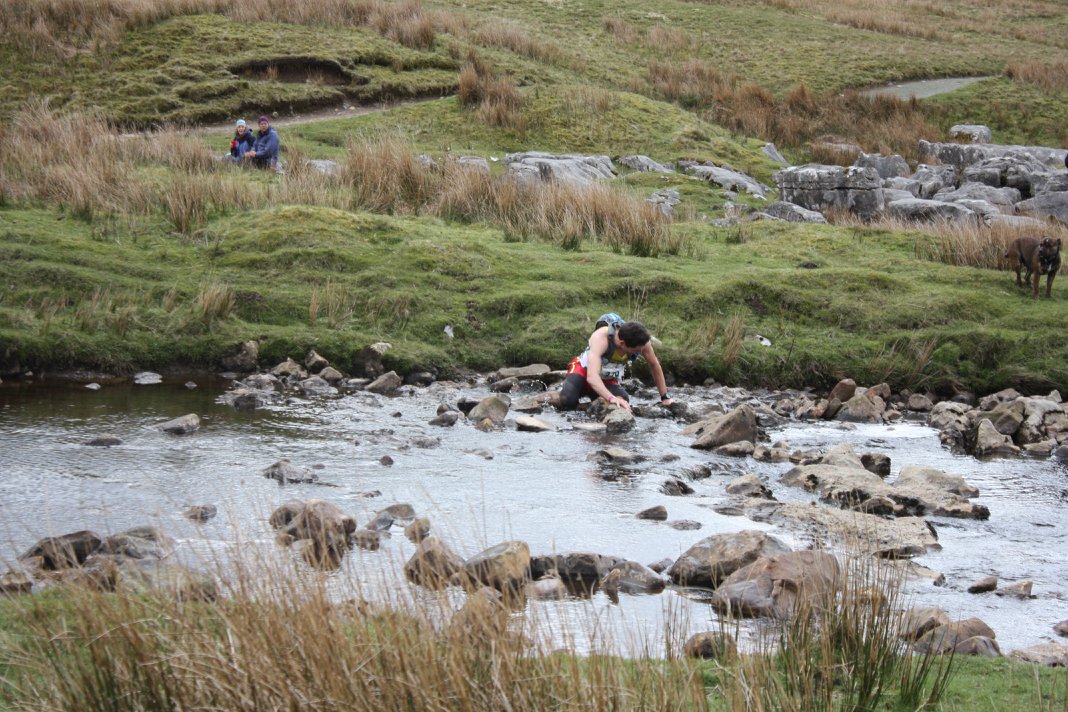 I’m a proud Yorkshireman who through family and residency is an Irish international, so why the Australia vest?  Truth is, it’s the tightest fitting singlet I own, a trade from last year’s Worlds, and I figured it’d be the most comfortable top for this race.  It certainly elicited some surprised reactions, most of which were immediately dampened by my Northern Hemisphere accent as I thanked the support.  Apologies to anyone left under the impression I’d flown in for the day, sometimes I was puffing too hard to chat!

The final peak is Ingleborough, a progressive curve of a ramp, lulling you in with shallow field entrances before twatting you in the face in the final few hundred metres of suffering.  Fortunately, I’d watched Victoria Wilkinson’s top tips on YouTube and she’d told me to keep energy in the bank for this very section.  Final gel swallowed at the base and a gradual warm-up before simply maintaining the pace on the tortuous and uneven steps.  It was one of those rare and beautiful occasions where the body simply responds to will, and I had puff to spare whilst running all but a handful of metres in the steepest section, even able to converse with onlookers who told me I looked the fastest yet!  Needless to say I checked later and Tom and Murray still battered me between Hill Inn and the summit, but I was up with Ricky and Jack and took ninety seconds out of one of my fell-running heroes, Calder Valley’s Karl Gray.  The effort gained five places and dipped me into the top ten, hitting my most ambitious of expectations.  With hindsight, I wish I’d pushed harder from the bottom, I certainly could’ve gone a couple of minutes quicker, but then who knows if it’d have impacted the loooong descent to the finish. 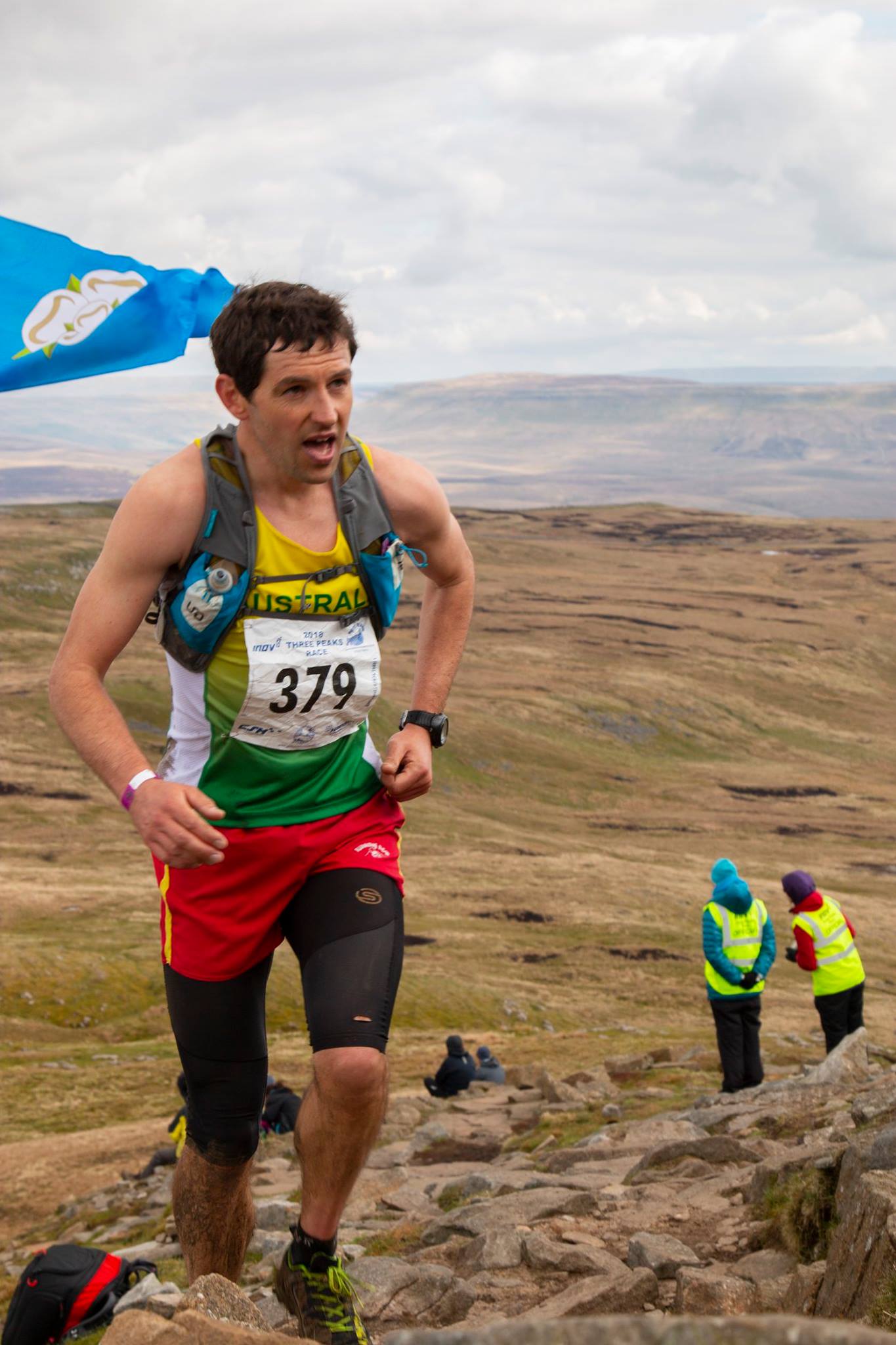 And what a finish it is.  A run in so lengthy it was probably directed by Peter Jackson (Google it!).  The tricky surface and tiring legs combined with the only moments of navigational panic to make for uncomfortable moments as I sought the track down to the railway crossing in Horton-in-Ribblesdale.  Underpass safely navigated and a sprint to savour, squeezing out the dregs to minimise the seconds.  Over the line, 9th place, 3:05:32, not bad for a first-timer and I’d be confident of a sub-three if I can find a similar performance to add to my new-found knowledge.  Delighted with my time and pleased with the result, a slightly bigger fish now in this ocean of talent.

Top-ten put me on to the extended podium and so I stuck around, watching my Dad’s band put in a herculean two-hour set in the searing heat of the tent, probably as hard an effort as the race itself!  With a flight back to Dublin leaving imminently, I was sweating over the delayed proceedings and am eternally grateful to the organisers who let me skip the queue to collect my voucher.  About to exit stage left, I was accosted by the ladies on the top table who dragged me back up to be awarded the stunning Jack Bloor trophy for best newcomer, adding my name to some extremely talented athletes including N.I.’s own legend, Robbie Bryson. 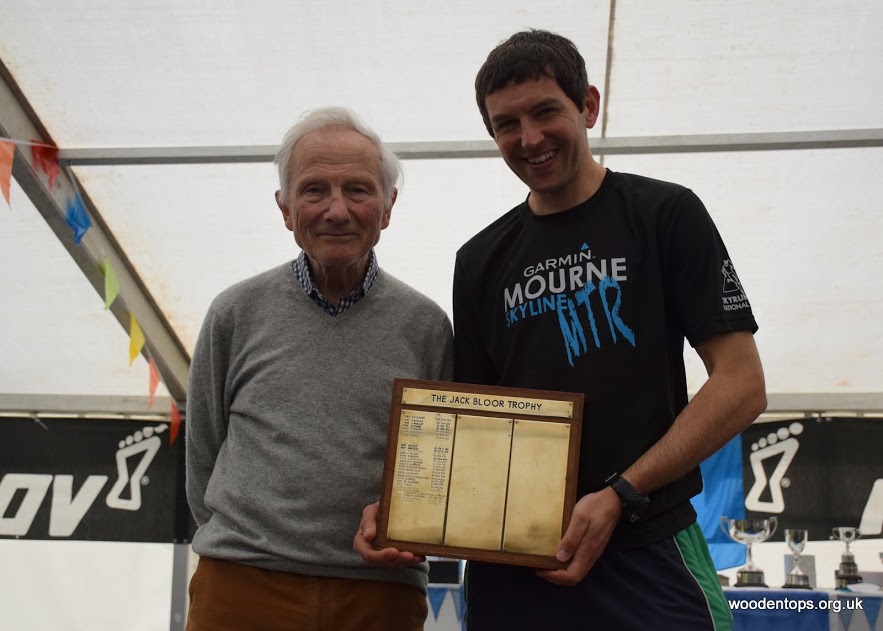 Not Flying Fish, Ryanair to Blame

A rushed drive to Leeds Bradford was rendered unnecessary by a delayed flight that gave time in the airport to digest the day.  What an event!  A brilliant course through breathtaking scenery and over breath-robbing hills; precision organisation and awesome marshalling, hundreds of vocal and friendly supporters, the Three Peaks definitely delivered!  Ten minutes within ‘Elite’ time is gratifying, sixteen off the win less-so, but Tom is a different breed.  Congratulations to everyone who completed the course and huge thanks to all involved.  I think I’ll be back again but before that it’s all about Poland and the World Long Distance where I definitely won’t be wearing the Aussie vest.