I had an interesting conversation today with a mate I’ve not seen in a while.  He’s signed up for a half Ironman this year, and also a full Ironman next year, guaranteeing well over twelve months of self-motivation.  Like Aidy, I’m a huge believer in having future goals, reasons to drag yourself out in the lashing rain and cutting wind over the dark months beyond the simple wish to not get fat or unhealthy.

I could see he regretted telling me that completing the course was his sole aim as soon as the fact left his lips, instantly realising he’d shared that nugget with the wrong person.  Backtracking slightly, he alluded to possible time targets whilst knowing that my approach to competition and training couldn’t be more different.  Specified goals and prioritising pain for key sessions has always served me well, and even events where winning is an almost certain impossibility are approached with ambitious demands.

This morning saw my final long session in preparation for the World Long Distance Mountain Champs next weekend, the dreaded ‘triple Donard’.  It’s a brute of a session, comprising 17.2 miles and 2550 metres of ascent and descent on technical and jarring terrain.  Almost unique amongst my selection of longer testpieces, it simply contains no respite, pushing hard on the climb before attacking the entire descent in order to hit very pushy split-times.  I’ve coveted a sub three-hour triple for years, ever since managing to dip under 3:30 for the first time a few years back.  As aspirations go, it’s unspeakably difficult, and yet with a 3:04:25 PB, also tantalisingly close, certainly feasible enough to retain a spark of belief.

Today wasn’t the ideal time; with four hard sessions over the previous three days, the likelihood was that the wheels would fall off at some point.  Unfortunately, the weather that has been stunning for weeks is due to break tonight and I’d rather face this one feeling leggy than into the face of a 50mph gale tomorrow.  Usual preparations, glass of water, cup of tea and down to Newcastle for a 7am start, planning to go off hard with the intention of staying ahead of the interim splits to drive motivation.

Lap one was a peach, 39:03 up and 19:33 down whilst maintaining a fast but comfortable cadence.  58:33 is a fairly quick single lap effort on the main-track route that I use to guarantee consistency of surface, so confidence was high rounding the bollard at the bottom and commencing lap two.

This second lap is always the toughest, a subtle balancing act between a tiring body and the need to stay on mark.  The leg-speed remained high but with a very slight time delay on every uphill stride, the gradual removal of spring from the step accumulated split seconds and resulted in a 42:57 ascent.  The headwind had also noticeably stiffened on the exposed mid-section, funneling down the valley, battering body and mindset.  The descent was overly tentative, a 20:03, sub-consciously holding back in the knowledge that lap three usually dredges the soul once finished with the dregs of bodily energy.

And so it proved.  After bottoming out the second lap in 2:01:33, the sub-three dream seemingly shattered but a personal best still theoretically possible, I then subsequently died on the last lap.  To my credit, I avoided blowing completely, tempering the pace for survival and even finding a second wind on the summit ridge, but the damage had been done.  The wind cruelly taunted me, strengthening again and exploiting the weakest moments whilst the incessant gradient gradually picked at my spirit.  Topping out at 2:50:56, a miracle descent was required to even go sub 3:10 and that wasn’t to be, the heaviness in stiffening quads hindered flow and ultimately desired survival limited speed, a 21:51 for a total 3:11:47. 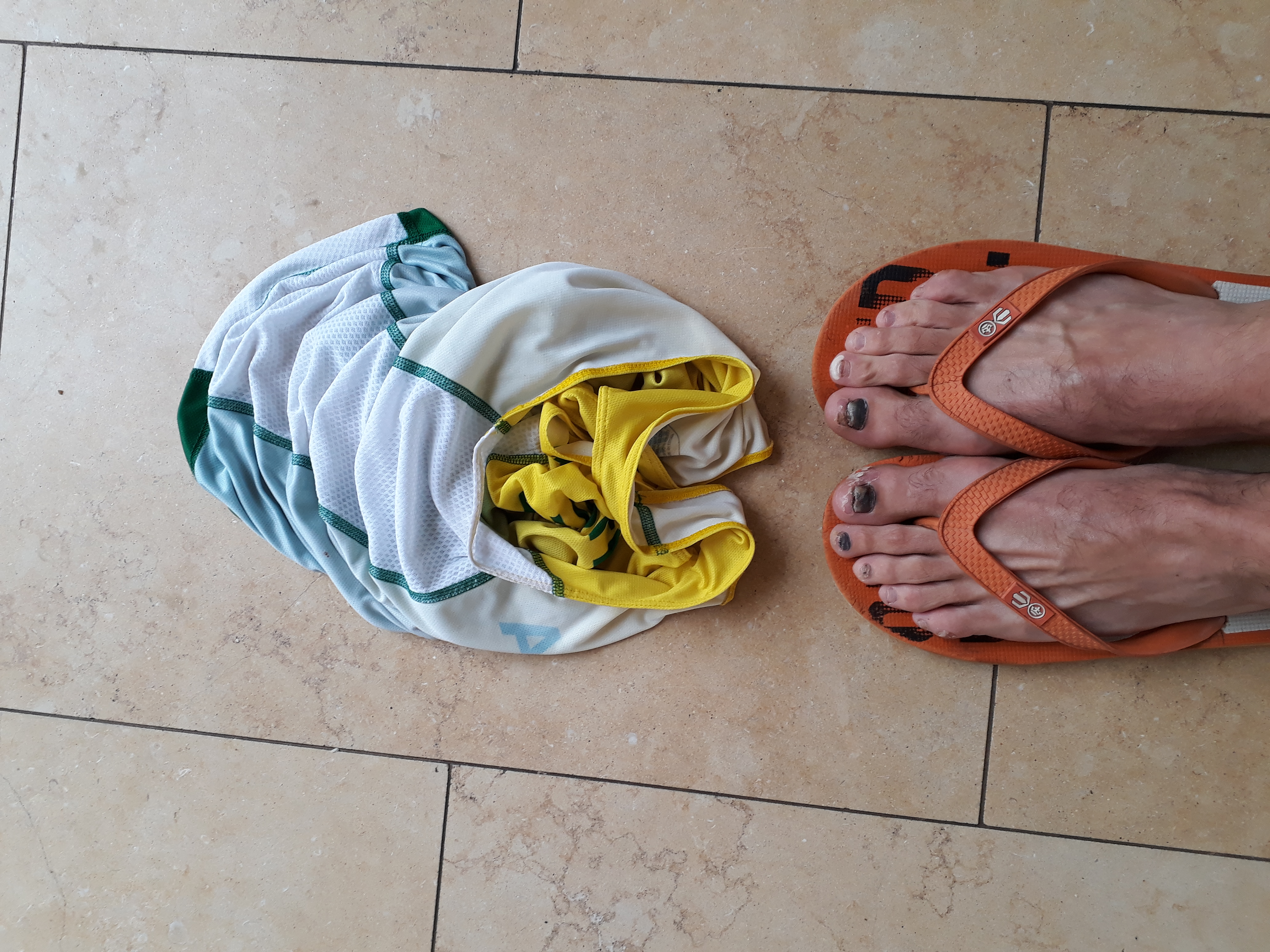 Bloodied toenails, blistered feet and a sweat-saturated vest. Suffering has to be part of training, otherwise is it really training at all?

It’s an extremely respectable time and I’m delighted the way I went about it, attacking throughout until an already beleaguered body called time and reined me back to reality.  After a heavy weekend celebrating mine and Anna’s joint 40th birthdays, alongside the aforementioned schedule since Sunday, this clearly indicates an underlying fitness that should drive through with suitable recovery.

Following the run I joined Anna for a quick cafe stop during which I struggled for consciousness, suffered waves of mild nausea and then my lips went blue.  Several hours later, following a measured process of re-fuelling I’m still feeling fuzzy and wiped out, vision a touch blurry, digestive system ruined, and I’ve just had to jettison the lap-top to massage a cramping leg.  And here’s the point of this blurb.  Without realistic yet demanding goals I’d never be prepared to push so hard, and as a consequence wouldn’t experience the subsequent fitness breakthroughs.  Obviously not all sessions are this destructive but they’re all planned with outcomes in mind and without that I’d struggle to call it training.

Whether that matters or not is another question and that depends on your own aspirations.  Whenever I go biking with the lads I tend to climb hard and then drop down again to re-do the climb until everyone reaches the top.  It’s not to feel superior, or to piss them off particularly, it’s simply an enjoyment of physical exertion.  Despite it being a good workout, I don’t call it an interval session in the training diary because that was never the specified aim.  For me that’s the difference.  Hammering trails with your mates is great fun, and will aid physical conditioning, but if you harbour ambitions to compete at a high level in any sport, or if you seek tangible improvements in your own performances then you need to be focused, and above all else I believe you have to embrace suffering as a true friend.  It’s horrifically tough at times, waking in the night in dread of the following day’s exertions, but the aftermath is glorious, and when racing becomes a welcome respite to the brutality of some of your training then you know you’re headed in the right direction.