The Power Of Certainty 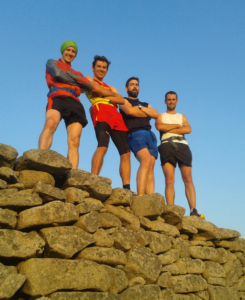 I wake groggily, the weak grey light forcing through a crack in the curtains.  Gusting wind driving rain at the window in sheets, flexing the perspex and sapping my will to rise.  Slipping back out of consciousness I shelve the planned early morning session, later, later…

The next time I’m truly aware of what’s going on is about 45 minutes later.  I feel myself rejoining my body, vision becoming clear and I’m no longer in my bed.  Heart rate is pumping and hamstrings a touch tight, I’m a quarter of the way into my eight-mile testpiece and moving well.  Obviously I know how I got here, I was vaguely aware of slipping on the Skins and Inov8’s, downing a cup of tea and driving to the trailhead but none of it involved much cerebral input.  There’s a deeper power at work, an internal drive that supersedes conscious input, I call it the power of certainty.

I’m not always a big trail running fan, not compared to the wildness of the mountains where technicality of terrain adds excitement and a sense of space is all-encompassing.  Don’t get me wrong, I still enjoy it but there’s little to deflect the pain and so I get lost in internal monologue, self-conversing and emphasising suffering.  The four week trail running training block I’m currently undertaking is just praying for excuses to skip a session.  Today they included;

– A tough and successful week already completed, surely an extra rest day would be beneficial?
– A slight tightness in the hamstrings that may be exacerbated.
– A tough work day yesterday with a four hour commute and the mental strain of delivering a course.
– It’s Sunday, how’s about a lie in?
– My god, that weather sounds shocking…
– I’ll delay until later and enjoy breakfast with Anna and the boys…

Any one of those in isolation could’ve derailed the session if I’d stopped to think but the power of certainty overrides almost every time.  So what is it? 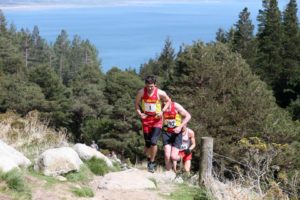 I read a really good statement recently that said if you want to get fit then relying on motivation is futile.  I think it related to the frantic post New-Year droves seeking gyms, detox, weight-loss, fitness and all the other resolutions that rapidly fall by the wayside.  The fact is that motivation alone isn’t enough because it fluctuates so rapidly and readily.  Even for the most driven of competitors with clear goals and a burning desire to achieve, there are plenty of times that the will to skip a hated session is almost overwhelming and the impeccable logic of excuses seems indisputable.  If you want to be your best you have to have a strategy to overcome the lack of motivation so I use organisation and fear tactics.

Planning my diary well in advance I decide on the sessions for a whole block, considering the specific gains I want to make based on the attributes of my next race and the dates I want to peak.  Once those sessions are in my head, that’s it, they’re set in stone and only very extreme circumstances relating to family, work or injury will allow alterations.  At this point I’ve mentally begun to accept the guarantees of future struggle, the likelihood of freezing, the certainty of burning lungs and tired legs.  All the excuses are dissipated long before the allotted day and so when it comes to it the run begins on auto-pilot.  At some juncture during every effort I do become aware of how I’ve duped myself again but by that point I’m already out and the battle is won.

The fear aspect is provided by the knowledge that if I do decide to skip a training session then a domino effect could be instigated, easing the cancellation of future efforts, allowing the spurious excuses to gain a foothold.  The power of this knowledge is enough to tip the balance on the occasions my consciousness is alerted before the exercise is commenced, usually when I’ve been unable to train first thing and allowed time to dwell.

The key to this approach is realistic planning.  If your training blocks are too ambitious then you’ll either get injured or exhaust yourself attempting to stick to a debilitating schedule.  You need recovery, savour it and the strength it provides.  You also do need a small degree of flexibility, the ability to read your body and respond to its messages decisively, but once the re-arranged session is planned then you must instantly set that in mental stone as there’s still no room for excuses.

Motivation is great, sometimes I’m chomping at the bit to hit the mountains again just hours after getting down.  Training can be amazing fun and we all know that the aftermath is almost universally positive, particularly after completing the toughest of sessions.  In reality though, the times it feels best are usually when the hard miles are already logged and you’re reaping the benefits.  Without the power of certainty I’d never again reach that state and so this trick of the mind will always remain a vital tool.